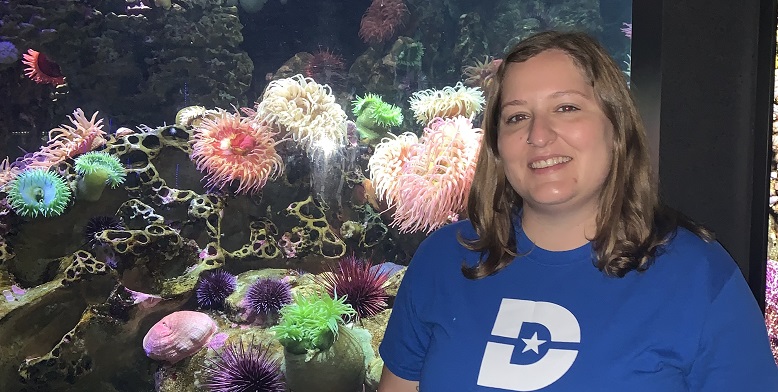 A historic winter storm on Valentine’s Day 2021 put thousands of sea turtles at risk along Texas’ Gulf Coast. Dallas College alum Nina Nahvi found herself in the middle of the rescue effort as the director of animal care at Sea Turtle, Inc. on South Padre Island.

The storm created a drastic drop in temperature, which was particularly felt in a shallow bay such as the Laguna Madre. The turtles in that area were cold stunned, leaving them unable to use their flippers and swim.

“All of the turtles go into a state of shock. They end up getting washed ashore by the waves,” Nahvi said. “So, we get them off the beach, slowly warm them up and release them when it’s warmer. Every year, we’d have maybe 200 turtles. Then last year, we had a world record. Literally 12,000 turtles came into Texas, including 5,500 turtles on South Padre. We clearly weren’t ready for 5,500 so it was an incredibly chaotic time.

“Fortunately, a lot of people came together from the community.”

South Padre Island’s Convention Centre opened its doors to house the turtles and, after a week, the surviving turtles were released back into warmer waters.

There’s no better feeling than rehabbing an animal and releasing it back into the wild, Nahvi said, and that’s what made a traumatic week rewarding in the end. It’s the reason she loves working with wildlife every day.

And she wouldn’t be in the position she is – now as the New England Aquarium’s medical center manager – without Dallas College. Nahvi is among the many success stories who have come out of the school’s Veterinary Technology program over the years. She’s an example of just how diverse and wide-ranging the job opportunities are for graduates.

“Most people probably think of veterinary technicians going to work at traditional veterinary practices, seeing mostly dogs and cats,” said Dr. Kelly Black, the department chair of Dallas College’s Veterinary Technology program located at the Cedar Valley campus. “While that may be true for the majority of our graduates, we have graduates who have gone on to work in research, large animal practice, emergency medicine, specialty practices, zoos, pharmaceutical companies, education and continuing on to attend veterinary school.

“The options for using a degree in veterinary technology are wide open.”

Nahvi didn’t take the traditional path to Dallas College. She earned her bachelor’s degree in wildlife conservation at Humboldt State University in 2011, and then enrolled in the veterinary technology program a couple years later.

“Everybody thought I was doing it in reverse since no one else had a bachelor’s degree. But I’m like, ‘No, this makes sense,’” Nahvi said.

Nahvi drew that conclusion after interning with Sea Turtle, Inc. shortly after graduating Humboldt State. A vet tech license wasn’t mandatory, but it certainly would make it easier to land her dream job of being paid to rehab sea turtles.

As she now jokes, “I moved back home and lived with my parents … which was really fun in my mid-20s.”

It worked out, though.

“It was absolutely what I needed to do at the time,” said Nahvi, who went to Arlington Martin High School. “If I didn’t get my vet tech license, my career path would’ve been very different. I don’t think I would’ve been able to get a lot of the opportunities that I ended up getting because of that.”

After graduating from Dallas College with a 4.0 GPA in 2015, Nahvi landed a job at the Turtle Hospital in the Florida Keys. She spent a few months there before returning to Sea Turtle, Inc. as the director of animal care in 2016. In January, shortly after finishing her master’s degree at the University of Houston, she moved to Boston for her current role with the New England Aquarium.

A day in the life

No day is the same. That’s what Nahvi enjoys the most about her job.

One day earlier this month, she assisted on a surgery to cure a penguin’s lingering bumblefoot issue. The next day, she helped with an ultrasound on a stingray.

“You don’t know what’s going to happen,” she said.

Take the penguin’s surgery, for instance. A fairly routine procedure took a turn when an X-ray beforehand revealed the penguin had ingested a quarter.

Apparently, not every visitor adheres to the signs encouraging them not to throw coins or other objects into the enclosure. Fortunately, the quarter was removed with little trouble.

“Pretty cool stuff,” she said, referring to the procedure to remove the coin, not guests throwing items into animal enclosures.

For Nahvi, every day continues to serve as a reminder of what Dallas College instilled in her. She might not have done surgeries on penguins or ultrasounds on stingrays, per se, but she learned the necessary skills to do so one day.

“A lot of the classes teach principles that are applicable across the board,” Nahvi said. “In pharmacology, you use all the same drugs on a sea turtle that you’d use on a dog or a cat. In radiology, you still set up the X-ray machine the same.

“There’s not really a route for doing wildlife rehab, so having the vet tech license is the best thing I could have done to set me up for future jobs.”