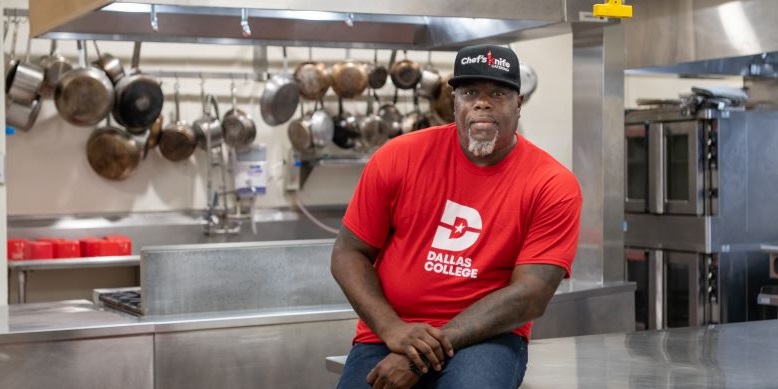 That’s what Dallas College alum Jason Blackwell thought of when he emptied the contents from a can in the opening round of competing on Food Network’s popular TV show “Chopped.”

“When you see the meat in the can … it’s pet friendly,” Blackwell said, chuckling. “It literally looked like cat food. I’m like, ‘I don’t know what to do with this.’”

In reality, the “cat food” was vegan patties and Blackwell eventually figured out what to do with it. He created a dish with the three other ingredients in the basket provided and went on to win the three-round competition.

Blackwell earned $10,000 for winning the “Chopped” episode titled “Chuck Wagon Cook-Off” (Season 52, Episode 7), continuing to establish himself as one of the most recognizable chefs to come out of Dallas College’s Culinary, Pastry and Hospitality program.

The only thing Blackwell knew going into the competition was that it would involve chuck wagon food. It featured four Texas-based chefs who traveled to Food Network’s studio in Knoxville, Tennessee to compete.

The show, which debuted in 2009, is described by the network as “chefs compete and turn baskets of mystery ingredients into a three-course meal.”

Blackwell spent the entire night before studying every part of the cow.

“I’m thinking, it’s chuck wagon, they’re going to give us beef,” he said. “I thought about doing Colorado oysters but those have to soak for 24 hours, so cross that off the list. But I knew it was going to be some type of beef. Beef is hard to mess up, but the question was which part of the cow.”

As far as the show itself, Blackwell said the time limits of 30 minutes, 20 minutes and 30 minutes for the three courses are “100% accurate.”

For Blackwell, being on “Chopped” is one of his more memorable culinary experiences. He was also a contestant on Food Network’s “Cutthroat Kitchen” in June 2017.

Competing on these stages is further validation for Blackwell’s career choice. This is a guy who earned a bachelor’s degree in criminal justice and had a successful career as a wedding photographer before pursuing his cooking passion.

Blackwell has always enjoyed being in the kitchen, but it wasn’t until 2015 that he went all-in on becoming a chef. He went to Paris to shoot a destination wedding and then spent a week in Italy. He took a one-day cooking class in Rome and, well, the rest is history.

Among his favorite dishes to make customers these days is a stuffed redfish.

“First off, it’s a Texas-based fish so I like that,” the Oak Cliff native said. “Then I stuff it with crab stuffing and top it off with a Pontchartrain sauce. It’s a fun dish.”

Blackwell remains a big supporter of Dallas College’s culinary program, too. In fact, he’s a fan of the entire community college system and encourages all of his Skyline students to consider going that route regardless of their desired career path.

“I used to look at community colleges as not equal to a four-year university until I became a student of the two-year institute,” Blackwell said. “It was then when I was like, ‘Dude, we’re getting the same education. There are no shortcuts. The education part was never shortcutted.’

“You pay a lower price but you get the same education, if not better. Maybe we should drop the ‘community’ part off. That insinuates this is the little brother to the big school, but Dallas College is a phenomenal institution.”

Especially considering it produces alums who go on to accomplish great things such as Blackwell, who offered a final piece of advice for anyone interested in improving their skills in the kitchen.

“Don’t be afraid to burn something,” Blackwell said. “That’s how you learn.”