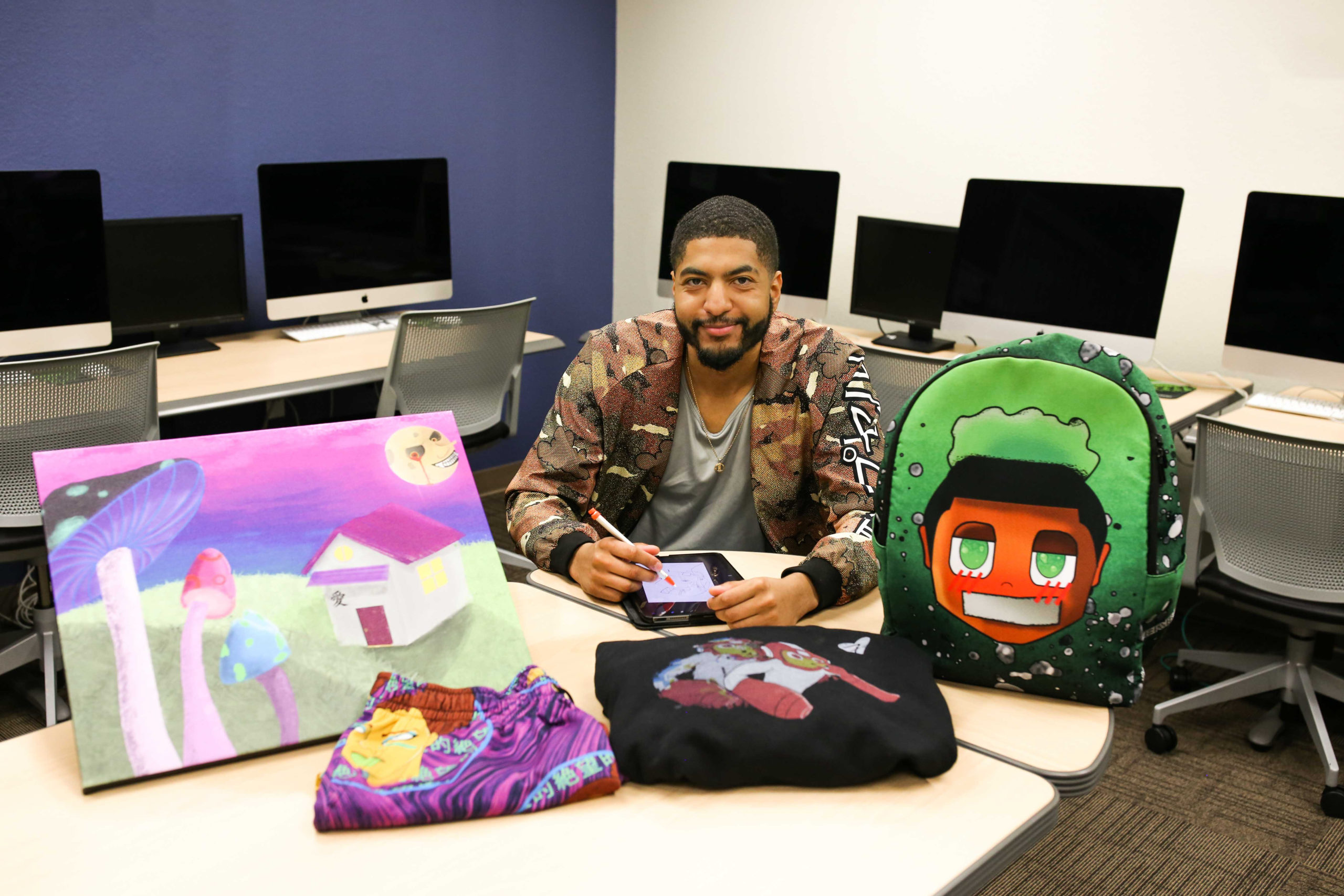 Published by Dallas College on November 10, 2021

What was life for you before Dallas College, and what was your experience coming to the college?

When I got out of the military, I struggled to find a job because I didn’t have civilian experience. I knew I needed the money but at the same time, I knew it was a good time for me to get back into something that I’m interested in. That’s when I decided to look around.

I’ve never been to college before. When I was in high school, I didn’t have the interest. And I would have been the first person in my family to attend, so I didn’t have anyone to help me because nobody knew how to enroll. So, I wanted to start with community college. It sounded like it would be an easier transition instead of a university. And it was. I chose the path of least resistance.

How was that transition for you coming out of the military back into civilian life?

I went into the U.S. Air Force when I was 18 years old. It was three weeks after I graduated from high school, and I served for seven years. So, when I got out, it was weird because it was the only thing I had known for so long. After a month of not having a job, the first thing I thought was that I needed to go back into the military. It was really hard because you don’t know what to do.

People told me the experience I had in the military would translate well into something else. But it’s not really the case. Just because you know electronics doesn’t mean you know how to go into a field on the civilian side and just start working. And not every employer wants to take you on.

Getting into school was intimidating. I was at the point when I had to feed my family and my 9-to-5 wasn’t cutting it, so I needed something more. In life, I find that pressure often pushes you to do what needs to be done.

When it comes to your artistry, where does your inspiration come from?

I’m a big nerd. I play videos games and watch anime. I always have. When I was in the military, I lost my artistic touch and drive for it. So, when I came back to school, the confidence came back for my art. My inspiration can come through games that I play, music I listen to or art I see sometimes on Instagram through other artists I like.

I’m not really big on trends. I definitely gravitate towards a ’90s vibe, or sometimes I draw from real-life inspiration like people I know or people who inspire me. Or people I want to work with. Sometimes, as an artist, you can flatter people by drawing your own rendition of their work.

I don’t want to be anyone else on this planet. I never looked up to people like that. But artistically, the person who is living my dream is Takashi Murakami. He’s really talented on several mediums. And that’s the thing about me, I’m like Peter Griffin. He does whatever he wants to do and tries everything, which is what I want to do. I want to draw different things or help build video games or design clothes.

What advice would you give to others to be themselves and original instead of looking to be like someone else?

I would say to stick with doing things that make you happy.

Why did you decide to go into the military and what the process was like?

It sounds like a really shallow reason for going, but it’s the honest truth. The Air Force recruiter told me I would get paid and there are girls. I thought, well this can’t be worse than where I’m at now. I’m at home getting in trouble all the time for not performing, so might as well go get paid for getting in trouble and getting yelled at.

It was an experience. I definitely think it’s a good idea for people around 18 to 20 years old to join. Usually, at that age, you don’t really have guidance or don’t want to listen to anybody.

Looking back at your experience in the military, do you feel like you’ve accomplished something?

I feel a sense of pride, but the experience weighs heavy on my heart. I feel like I have a sense of importance. I look back and remember the things that I’ve done and the places I’ve been. For example, I was deployed in Kuwait. We helped stop or slow down terrorism.

But there’s a struggle because the memories can be a lot. My mental health was and is tested. Especially where I was at because a lot of people died. They died because of war, but others died because they were stressed out and overworked. I’ve been at work for 14 hours before and was told to stop complaining. In those moments, you feel like it really sucks because you don’t appreciate the way they’re talking to you.

But then you think of the things you’ve accomplished and the places you’ve seen. You do have a sense of pride about it and feel accomplished. So, it’s definitely a love-hate relationship, but everyone’s experience is different. It’s definitely a two-way street.

Sometimes you hear negative about veterans not wanting to go back to school or they think it’s not for them, they’re not welcome or it’s too late. Why is college right for you?

A lot of people lose themselves in the military. They don’t have a sense of individualism because when you’re in, you are part of a team. It’s not a bad thing being on a team, but you have to also be grounded in who you are as a person. That’s why you can see a lot of people in the military get out and then go right back in, because they don’t know what to do with themselves. I think that’s where that negative thinking comes from.

I might have lost myself momentarily in the beginning, but I came back and realized what I aspired to do and be because of the passions that have driven me forward.

What does Veterans Day mean to you?

Honestly, as a veteran, I think of free food. You think of all the places you can get free food. But it’s nice to be appreciated. The recognition and appreciation are what it’s meant to be about. And then you think, let’s go get some free food.

What advice would you give to veterans who are thinking of going back to school?

You have to be who you’re meant to be. Find out who you are and what you want to do. That’s the first thing. And once you figure that out, figure out what degree plan can get you there or take you to the next level. But you have to know who you are. That’s probably what is stopping people – not knowing who they are. There’s always something more. Find it because it’s important for you educationally and mentally. Especially for your mental health.