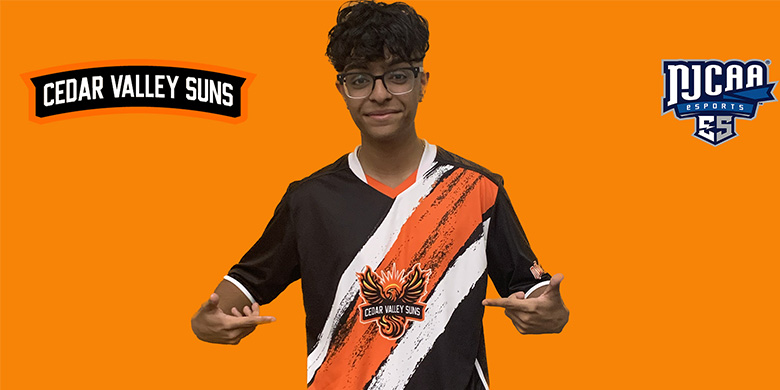 Published by Dallas College on December 13, 2022

“It’s crazy,” Ajani said. “We put too many hours in. Coach (Marcus Woodard) said it from the beginning, the first practice, ‘You ready to win a championship this year?’ I told him, ‘Yeah, I am.'”

It was the second straight semester in the inauguration of Dallas College’s esports existence Ajani has advanced to the NBA 2K Finals. He overcame a first game setback to beat Jonathan E., who received a scholarship from Heartland Community College, 2-1, in the best-of-3 semifinals.

“After I dropped one game against him, something just clicked,” Ajani said. “In the third game, I blew him out of the water. Going into that game before the finals, it was just really crazy.”

In the quarterfinals, Ajani, “HyperCrazeTTV,” who attends Dallas College Brookhaven, beat Isaac S. of Carl Albert State College, 2-1, in a tough matchup. Ajani beat Chase K. of Dawson Community College, 2-0, in the second round after a first-round bye.

“Going into that playoff game, pretty much I had to fight through it,” Ajani said. “My shots weren’t falling, and I had to figure it out. Coach really, really coached me through the first three playoff games. It was a just a wild experience. I don’t think I would have done it without him. It was a lot of defensive adjustments. My offense is strong. Coach really pushed me through, and made some key defensive adjustments.”

Ajani, who lost in the finals in the spring in Dallas College’s first year of existence, went 7-0 in the fall regular season. He was one of the top NBA 2K NJCAAe gamers coming into this season.

“Last season, I knew Aahil had a good enough skillset to compete at a high level, so it was just a matter of getting him better prepared, and to get his confidence level to a point where he felt he could beat anybody in the field, and we accomplished that,” Woodard, “Coach King,” said.

“I feel like with me being a student of real-life basketball, and knowing the ins and outs of 2K from a meta and a game mechanics perspective really gives us an edge at Dallas College’s NBA 2K esports program.”

Ajani will compete in the spring as Dallas College continues to expand its esports program.

“We need more students to get involved with Dallas College’s NBA 2K esports program as well as the other titles we offer,” Woodard said.

Ajani is hoping to land a scholarship to continue his esports career and education at the four-year level.