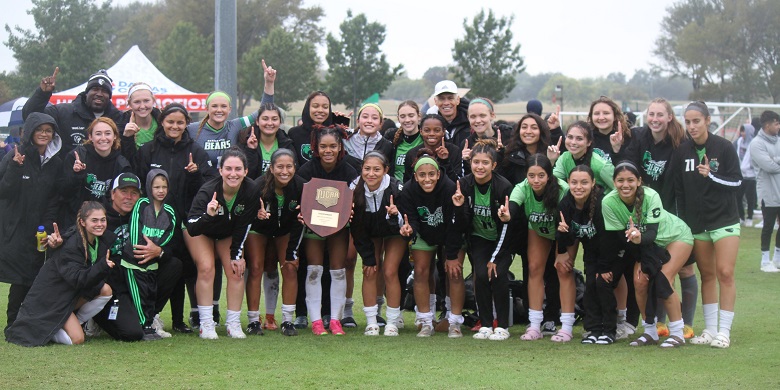 Published by Dallas College on November 2, 2022

Dallas College will have three teams competing for national championships this fall.

The Brookhaven Campus women’s soccer and volleyball teams, as well as the Richland Campus men’s soccer team, all punched tickets to compete on the biggest stages of the season.

The Brookhaven women’s soccer team is looking to repeat as national champions as it plays in the NJCAA Division III Championships scheduled Wednesday, Nov. 9 through Sunday, Nov. 13 in Herkimer, New York.

The Bears are the top-ranked team in the Division III poll. They earned a trip back to the championships by knocking off Dallas College Richland, 1-0, to win the Southwest District title.

As Brookhaven coach Jimmy Elder said after winning the district crown, “Quite frankly, I’m very relaxed. We don’t have a lot to lose. We’ve done the hardest thing possible, which is to get there.”

Brookhaven is ranked No. 4 in the country and is scheduled for a quarterfinal match in the national tournament on Nov. 10 in Rochester, Minnesota. The national championship match is set for 4 p.m. Nov. 12 in Minnesota.

On the men’s soccer side, Richland has established itself as a powerhouse in the sport. The Thunderducks will be going for a fifth straight championship after winning the NJCAA DIII Midwest District Title. The men’s tournament is being held Wednesday, Nov. 9 through Sunday, Nov. 13 at Genesee Community College in Batavia, New York.

Richland has been ranked as the No. 1 team in the country since the preseason as it has won four straight national championships and 11 overall in program history. This is its 17th appearance in the national tournament.