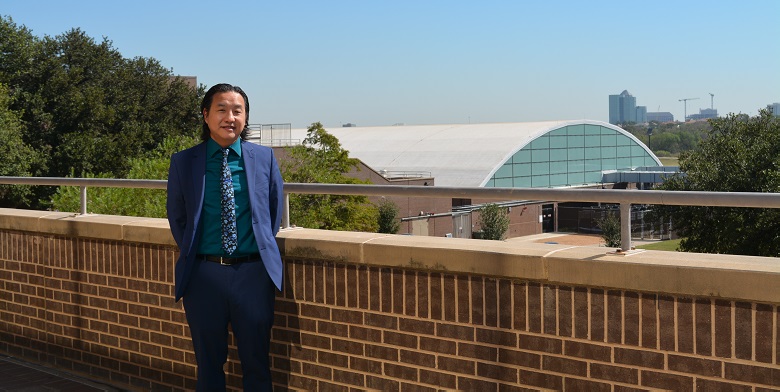 Published by Dallas College on October 31, 2022

“Every story matters,” he said. “History never ends until every story’s told.”

It was his parents’ story that first got Vu interested in studying history. His parents were Vietnamese refugees who endured the traumas of war and resettlement in the U.S.

“The story of my parents as well as their generation really impacted my life, not only in terms of their personal sacrifices but also their perseverance, heroism and just the human will to survive,” Vu shared. “That really captured my imagination.”

Strangers in a Strange Land

That captivation led Vu to earn his Ph.D. in history from the University of Houston. His focus has been the Vietnam War, U.S. diplomatic history and Asian American history.

What he finds most fascinating though is studying how members of a diaspora, like his parents, have managed to resettle in the U.S. and also retain aspects of their former lives, whether it’s food, language or culture.

And Vu’s interest is not limited to just the Vietnamese diaspora. “I’m interested in diaspora communities all over the world, whether it be the Jewish diaspora, African diaspora, etc., and how they managed to rebuild their lives in their own ways despite being strangers in a strange land and having to start over.”

Vu taught at Houston Community College and Rice University as an adjunct professor before making his way to Dallas College’s North Lake Campus 16 years ago.

What brought him to Dallas? When asked, he smiled and gestured to a photo on his bookcase: his wife. “I followed my love. It’s the best move I ever made.”

At North Lake, Vu also fell in love with the campus culture, which he described as like a family. But what truly drives his passion to teach at Dallas College are the students themselves. “The students have been phenomenal.”

Vu recently had the opportunity to take 40 Dallas College students on a civil rights tour through Mississippi and Alabama. Touring sites like the 16th Street Baptist Church in Birmingham, Dexter Avenue King Memorial Baptist Church, and the National Memorial for Peace and Justice in Montgomery was a transformative experience — not only for the students, but for Vu.

“It was such a humbling experience,” he said, recalling the group discussion on the last night. “The students really poured their hearts out and gave us incredible insights into what they were experiencing at the time and how learning, or relearning, such history has transformed them to not only become better students but better U.S. citizens. Their testimonies were powerful and profound.”

On the final day of the trip, the group visited Selma, Alabama, and crossed the famous Edmond Pettus Bridge, walking the same path as civil rights leaders like Dr. Martin Luther King, Jr., and the late Congressman John Lewis.

“To cross that historic bridge and walk along the same footsteps that many other civil rights activists have crossed was a humbling experience,” said Vu. “I felt humbled, honored and privileged to be a part of that trip.”

For Vu, there is something to be said for learning history beyond reading it in a book or studying it in a classroom: “I read about civil rights history in history textbooks…and it’s necessary to read history books and learn more, but there’s something surreal about actually being there.”

History Must Be Told

Vu believes that the most important role for historians is preserving history — from documenting the personal stories of individuals to recovering the forgotten history of marginalized communities.

This past summer, the Asian American Resource Center in Austin hired Vu as a researcher for an exhibit on the Asian American experience in Texas. For the project, he had the opportunity to work with four Dallas College students to collect and document the stories of nine Nepali immigrants in Texas, illustrating how, as Vu says, all history is personal.

In a quest to preserve history, Vu has also worked on projects documenting the Old Little Saigon and Old Chinatown neighborhoods near downtown Houston, which are disappearing due to gentrification and new high-rise developments in the area.

“It’s vital that we understand that sometimes; unfortunately, history can be erased and made invisible,” Vu said. That’s why the role of historian is so important.

“History must be told. Because it defines our existence…If you don’t know your history, you know less about yourself. History defines us. That’s important for all of us to know, not just historians. Whether it be sitting down at the dinner table, asking your parents questions and wanting to know more about your parents’ history to studying the history of old Chinatowns. All that is important, and it’s imperative that we make sure we document history so that history doesn’t become invisible, forgotten or erased.”