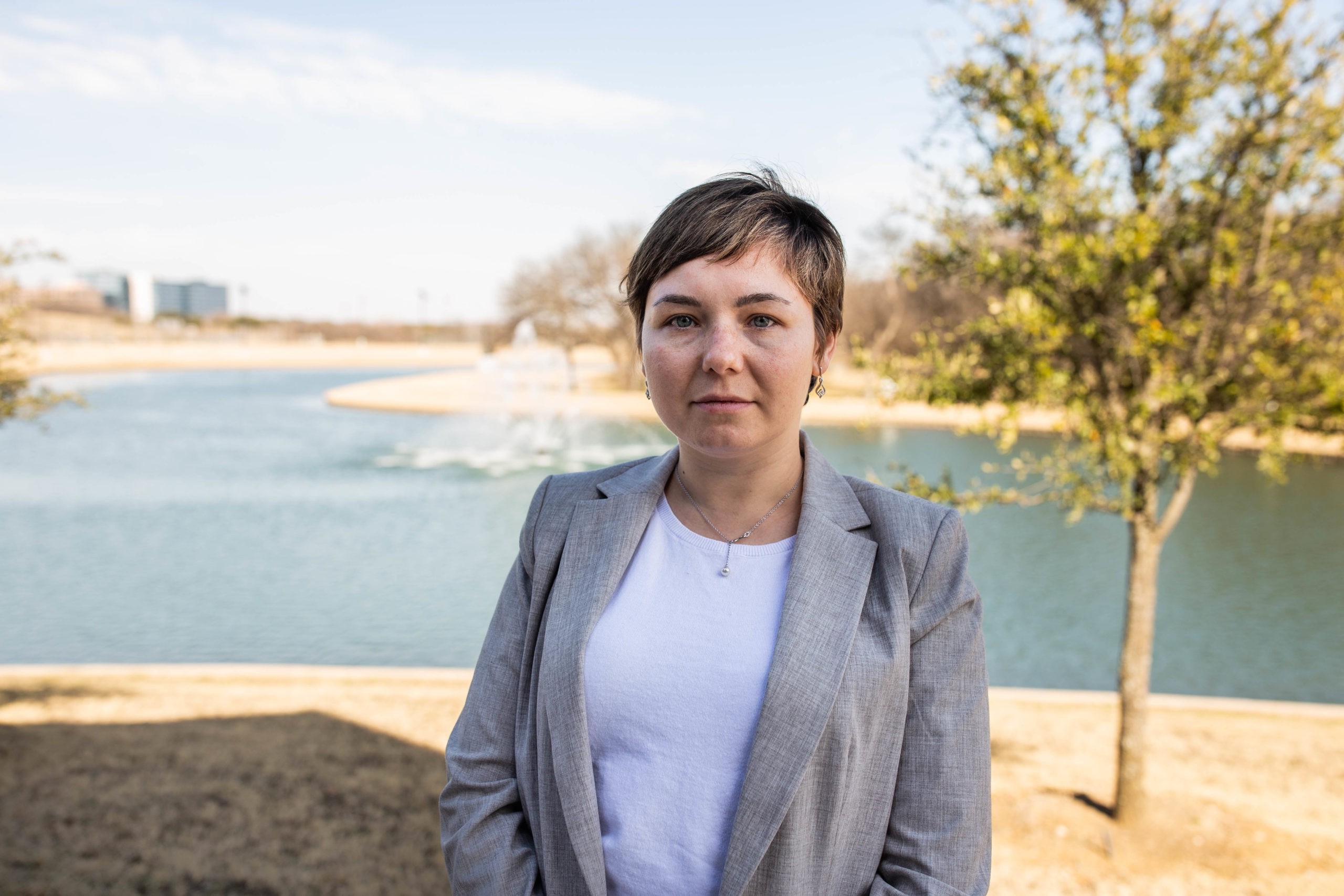 Published by Dallas College on March 4, 2022

North Lake Campus student Hanna Lutchenkova was born and raised in the Donbas region of eastern Ukraine. In 2014, an armed conflict between Russia and Ukraine erupted in the region, turning it into a battlefield. She hid in her apartment for four months during the fighting until she was able to pay someone to smuggle her and her son to safety; they eventually settled in Kyiv.

She fell in love with and married an American man, and in May 2019 Lutchenkova and her son moved to Texas to start their new life. Now, she’s watching her beloved country be invaded again, but this time she’s nearly 6,000 miles away. To show support for her friends and family enduring the conflict, Lutchenkova has chosen to share her story.

This interview has been edited for clarity and brevity.

Is your family in Ukraine?

Part of my family, including my siblings, are still in Ukraine. My mother has already died, and my stepfather disappeared. I still don’t know where he is or if he survived. Where my siblings are staying, more or less, it is safe for now.

I also have friends who are still in Ukraine. I stay in contact with them every single day. Each morning, they let me know that they survived the night. No matter what, they try to stay positive. Right now, they are trying to stay safe in shelters.

I’ve asked my friends and family to move, at least to another part of Europe. Some want to and others do not. I don’t blame those who want to stay. I’ve moved away myself, and I understand the consequences. But for those who want to move, it is too dangerous right now to leave. It’s better for them to stay instead.

When everything started to happen last month, did they evacuate?

When everything started, nobody believed it. As we all know, on the news [Putin said,] ‘We just had training.’ And then one day, in the middle of the night, he said it was war. It was 2 a.m. when the news broke out. My friends who are still there did not believe him. And I understand that it is hard to believe what he says is true. I warned them that it was real because it was a similar situation that I went through [in 2014]. But it is hard to believe.

How do you help spread awareness and gain support for what is happening in your country?

Since I am no longer living in Ukraine, I share as much helpful information as I can on social media. Mostly on Instagram. When local Ukrainian businesses can provide any assistance like food or medical supplies, I share online.

I’ve heard stories, for example, like a woman who gave birth to her twin babies in the basement of her apartment, which is not as nice as the ones they have here in the United States, when there was an attack in the cold winter. They did not even have a cot or water. When I heard this, I kept posting online and sharing the news to help women like her. Eventually, people found her and provided her with what she and her children needed. But while there are resources out there, not everyone has access or is aware of what is available.

I understand not everyone can help financially or physically. But simply sharing information online is a way to help. Sharing the blue and yellow heart to show that you stand with Ukraine is more than enough instead of staying silent. We need to change the mindset of those who think Putin is good or that it is good to kill kids or threaten others with nuclear weapons. As more people shed light on what is wrong, we can continue to build the right mindset for everyone, especially the younger generation.

How are you handling everything going on in your country while you are in school and a mother?

I feel guilty. That is my biggest problem because I feel that I am not doing enough to help since I am here in the United States. I am stressed. I can’t eat because of what is going on, so I’ve even lost some weight. When I went through a similar situation, there were many times I didn’t have food for myself. I made sure my baby was fed, but I would skip meals.

Since I went through something similar in 2014, this whole situation right now has been so painful for me. I know how it is every day for my people in Ukraine. It almost feels like I’m still there because it’s brought me back mentally. Each day feels like the longest day of your life. The absolute longest. That is why I want others here in the United States and around the world to know the truth. Misinformation is being spread. For example, it was [said] that the Russian president said that they saved peaceful citizens with nuclear weapons. That is insane. It is so important people know the truth of what is actually happening.

What advice or what message would you give to other Ukrainian students studying in America?

Don’t stay apart. Don’t separate yourself from your country. Some Ukrainians who are now living in America may feel that it’s not their problem because they are no longer living there. But we must represent our country by saying something. Not for ourselves but for the sake of others. There are others, celebrities even, who do not have any connection to Ukraine, but they are sharing ways to help. So, how could a Ukrainian in America not show support to their own country?

What support have you received from Dallas College during this challenging time?

I have received support from the counseling services at Dallas College. I have been crying and worrying about this entire situation with Ukraine, but since I’ve seen a counselor, it helped me organize my thoughts and to refocus a bit. To concentrate on the other areas of my life that need my attention, like my husband and kids. But at times, it can be super difficult.