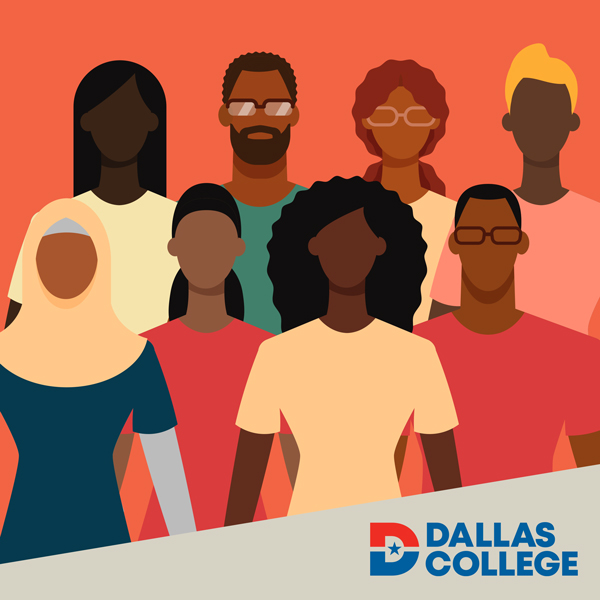 Published by Dallas College on February 1, 2022

As we enter Black History Month, the Office of Diversity, Equity and Inclusion encourages you to expand your understanding of the language that is used to describe people of African descent. This article explores the use of racial and ethnic terms, as well as social attempts to create a more inclusive environment that acknowledges and embraces the diversity of the Black community.

Race and People of African Descent

Today, race is a social construct to categorize people by phenotype or distinct physical characteristic such as skin tone and hair texture. However, that was not always the case. The PBS documentary “The Origin of Race in America” reveals that the earliest use of the word “race” was intended to describe kinship or people of the same household with shared ancestry.

The use of “race” in the U.S. evolved during the 17th and 18th centuries with global capitalism, colonialism and slavery to justify the genocide and enslavement of Native or Indigenous Americans and people from Africa. More specifically, slavery rendered people of African descent as not human, enslaved for life with no contractual agreement for their labor. The 250-year history of institutional slavery in the U.S. has undeniably shaped how people of African descent are treated and how they navigate society today.

The Term ‘Black’ Is About More Than Race

While there has been a historical and ongoing debate regarding the use of the word “Black,” it encompasses a broader range of people than the terms African American or Black American. These words are not interchangeable.

As such, the Black community is no monolith. People from varying continents, countries, regions, states, cities and language groups can be and identify as Black. The Black community is diverse and expansive in its national origin, cultural norms, beliefs and expressions.

The Debate Over Black Identity

The diversity of the Black community sparks debate regarding how best to identify, describe and embrace Black identity. For example, the use of the word “Negro,” used by African Americans in the 18th to mid-20th centuries, is generally considered inappropriate and derogatory today. However, in Spanish and Portuguese languages, a variation of the term “negro,” which means “black,” is sometimes but not always used as a term of endearment or to refer to friends.

Knowing the audience and being respectful of cultural and social implications matter. How one chooses to identify heavily determines the meaning assigned to the use of certain words and self-identified labels.

The Decentering of Black Identity in the Name of Inclusion

More recently, the terms “BIPOC” or “People of Color” are being touted as an attempt to be inclusive in describing the Black and nonwhite communities. While the term “BIPOC,” short for “Black, Indigenous and People of Color,” is used to acknowledge the systematic and social injustice that people of color experience, some people debate that it connotes a hierarchy among communities of color.

In addition to that, several have argued that the use of the term BIPOC reaffirms a societal caste by pitting all individuals of marginalized identities in one group and white people in the other, with the white group as dominant, specific, named and thus more valuable. The term, in some cases, discounts the lived and unique experiences of those members who are not a part of the dominant culture because their stories, narratives and needs are made less visible.

Instead of BIPOC, several other people prefer the terms “people/persons of color,” “communities of color” and “women of color.” The intent behind using these terms is to acknowledge the diverse racial, ethnic, gender and cultural backgrounds of a group of people who have typically been marginalized, underrepresented and underserved. Yet some debate that while these broader terms may be perceived as more inclusive, they contribute to erasure of Black identity, Black womanhood and Black culture.

Asking is important. We should refer to people as they wish or have expressed themselves to be.

Being Black Is Being Human

Fundamentally, Black identity and the terms used to describe people of African descent reflect a uniquely individual blend of self-identity and perceived identity based on historical and emerging social constructs. In other words, the Black experience is marked by tension between self-expression and societal pressures and expectations.

At the essence of the debate over terms used to describe Black culture is Malcolm X’s rallying cry: “We are fighting for recognition as human beings.”

The use of all these terms requires a deeper understanding of not only how a community wants to be described, but how each person within that community describes themselves as a human being.

About the Office of Diversity, Equity and Inclusion

The beauty of the human experience is that we are all uniquely different, yet equally worthy of fair, equitable, just and respectful treatment. We continue to encourage our community members to act with kindness in mind and heart and treat each other with empathy and compassion. Let’s live our mission and values by honoring our differences, embracing our distinct cultures and uplifting each other.