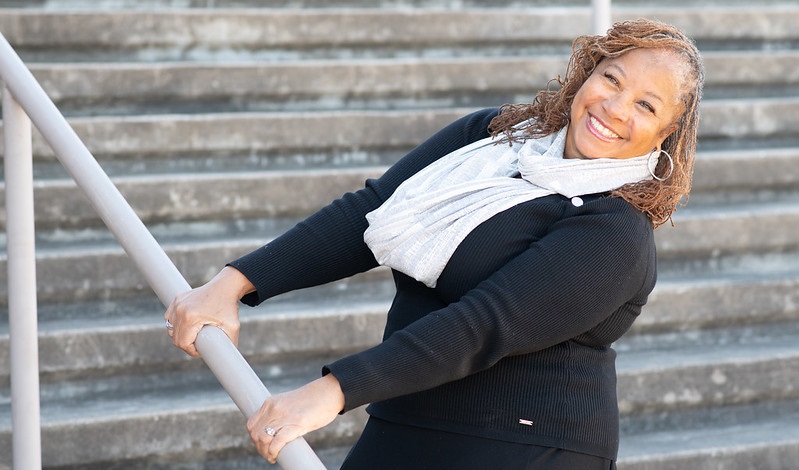 Published by Dallas College on February 10, 2022

Sherry Boyd’s father was the first Black man hired for the Texas Department of Public Safety.

“I’m a cop’s daughter and I’m afraid if a cop pulls me over. I’m not afraid I’m going to get a ticket for speeding — I’m afraid,” she said. “I find that so sad that as a brown skinned woman that I have that fear.”

Boyd is a professor of theater and humanities at North Lake. She joined Dallas College in 2002.

For her, the relationship between law enforcement and ongoing racial issues is unsettling. She hates that as the daughter of a police officer, she’s afraid of cops and her daughter is as well.

In her early 20s, Boyd faced a decision that would impact the course of her life. Fibroids are prolific among African American women and she had them growing up. She consulted with two white doctors and both told her she had no choice but to have a hysterectomy. Her mother intervened.

“My mother remembers Black women being sterilized without their permission,” Boyd said. “Because of her history, that kept me from having a hysterectomy too early in life, before I had my daughter. That would have been unfortunate because my daughter’s just wonderful.”

According to the CDC, Black women are three times more likely to die from pregnancy-related causes than white women. Quality of available health care and underlying conditions limit opportunities for minority and ethnic groups to access care for physical and emotional health.

“Without the support of my mother, I would not have had a child,” she said. “Because of the experiences she had early in her life with health issues.”

Growing up as a Catholic, which she says is highly unusual for a Black/African American, Boyd had her first communion at the age of six.

“Catholics drink out of a common cup (although not anymore since COVID), and they make you practice. They don’t want you to spit out the wine.”

Once the children were lined up in alphabetical order, there was a commotion with the priest and some of the parents who wanted her moved to the end of the line because they didn’t want their children to drink after her. Her mother stepped in.

When Boyd’s daughter was six years old, she wanted to go to school as Snow White. So, being a self-professed “theater geek” and knowing how to sew, she made the costume and sent her to school.

After school, her daughter said she didn’t want to be brown anymore because “people don’t like brown people.” A little girl at school told her she couldn’t be Snow White because she was brown.

“The older child was just repeating what they’d heard – or thought they’d heard,” Boyd said. “My daughter is biracial, and she wanted to be white like her father because people would like her better if she was more like her dad.”

So, Boyd went to the school and they organized an international day to look at culture and ethnicities across the board and initiated conversations with the children.

The next year her daughter wore the costume again and said she was going this time as Snow Brown.

Being in a biracial marriage has presented its own difficulties such as not being able to rent a house or apartment when she and her husband first married and the newspaper wouldn’t run their photo because they were mixed race.

“I don’t feel like I’ve had a hard life, but I’ve had difficult moments in my life like everyone —and they are around race,” she said. “Sometimes it does bring me down – sometimes it makes me sob because I can’t believe in 2021 that I still have to deal with that.”

For the past eight years Boyd has required her students to visit with her face-to-face twice each semester. It’s not just about having a discussion when their grades aren’t good, she’s working to establish a relationship with them early on. She finds that the students that hold their appointments to meet with her also come and see her when something goes wrong.

“I will tell you, when you sit down and have conversations with people and get to know each other, that changes minds. It changes hearts,” Boyd said.