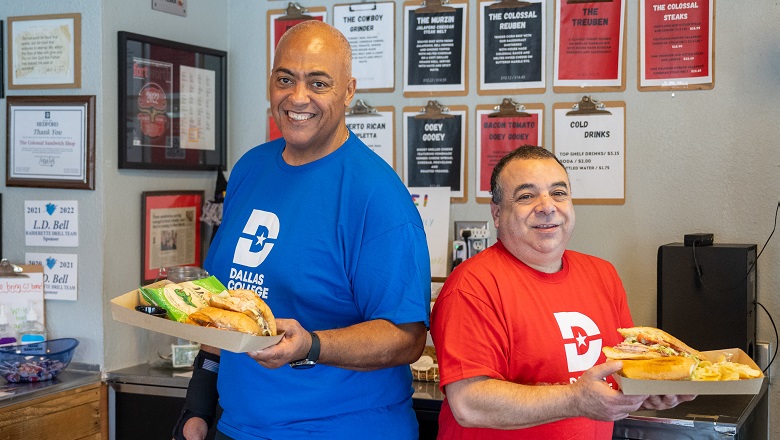 Published by Dallas College on November 9, 2022

The best ideas are sometimes born from simple problems.

Dallas College alums Jonathan Merrill and Terry Duncan were looking to grab lunch one day and struggled to find a local place that served great sandwiches. Fast-forward five years and the lifelong friends are now running one of the state’s most popular restaurants, The Colossal Sandwich Shop, in Bedford.

Customers have been flocking to the store since it first opened in a snow cone shack in November 2018 before moving into its brick-and-mortar home in January 2020. The bestsellers include the Mid-Cities Steak and Cheese, The Colossal Reuben and the Cubano.

“When I moved back here, we were meeting up for lunch. Our favorite taco stand had shut down and we didn’t feel like anyone made really good sandwiches,” Merrill said. “As we were talking about that, we drove by a little snow cone shack and Terry said, ‘If that closed down, that would be an awesome spot to open a sandwich shop.’”

As fate had it, the shack’s previous tenant moved out about a month later. However, Merrill and Duncan were too late as the landlord already leased it to another business. But that business lasted only a few months before Merrill and Duncan moved in November 2018.

That marked the start of a journey for a restaurant that is now among Texas’ 100 most popular among users of Yelp.com.

Terry Duncan worked in restaurants throughout his high school days. He enjoyed it enough that he decided to apply for Dallas College’s apprenticeship program after a brief stint at Tarrant County College.

Duncan was accepted and never looked back. To this day, he credits Dallas College and the apprenticeship program for setting him up for a career in the industry.

“It was a great program,” Duncan said. “They didn’t sugarcoat anything. Some of the other technical schools will promise all kinds of money and positions, but I was told when I was accepted that you’ll be working long hours and be the low man on the totem pole.”

Duncan was OK with that. He fondly recalled learning the ins and outs of the industry from instructors such as the late Jim Goering, who taught for 20 years at El Centro and oversaw the Chef Apprenticeship Program for 15 years.

Customer service ranked among the most important topics covered by the Dallas College instructors, and that remains a trademark at The Colossal Sandwich Shop.

“Almost every one of our customers says our customer service is far superior to anything else in this region,” Duncan said. “We didn’t really realize it or do anything different since it’s just been what we’ve been trained to do. That’s what we learned at Dallas College.”

Merrill, meanwhile, served in the Army before going to culinary school. He wasn’t part of the apprenticeship program but recalled similar values being instilled during his time at Dallas College in the early 1990s.

“Terry started the semester before I did, and I wanted to become a pastry chef,” Merrill said. “I still like baking, but Dallas College is where I really fell in love with cooking more than baking. I had a great experience and really enjoyed all of my classes.”

Dallas College provided the foundation for both Duncan and Merrill to have successful careers working in the hotel industry. The community college experience played a part when Merrill joined the recruitment team of a hotel chain, too.

There wasn’t any sort of “stigma” attached to prospective employees who came from a community college compared to a higher-profile culinary school.

There isn’t much behind the name of The Colossal Sandwich Shop.

Merrill is a large man with a colossal appetite, you could say.

“I used to not have a ‘full’ button,” Merrill said, smiling. “After school lunch, and eating a lot of other people’s lunches, I went into science class and told one of my friends, ‘Man, I’m going to open up this restaurant one day that has big food.’ I started calling it ‘Colossal.’

“When we started talking about this, just for absence of a name, we called it ‘Colossal.’”

The name fits when it comes to portion sizes and flavors. But it hasn’t been the easiest road to get to this point.

As many know, opening a restaurant is a gamble in itself. Then Merrill and Duncan had to navigate through the COVID-19 pandemic, just a couple months after opening the location off Texas 183 and Bedford Road.

But they persevered through it all and continue to satisfy customers on a daily basis. Maybe it’s that community college edge.

For anyone making the trip out to the shop for the first time, Duncan recommends the Alotta Muffaletta and its many “complex flavors.” The “Colossus” Pulled Pork is a sleeper, though. Merrill joked that his favorite sandwich is whatever one he’s eating at the time.

“You can’t go wrong with any on the board,” he said. “I love the Jalapeno Cheddar Steak Melt, but if I’m in the mood, I love the Muffaletta. But really, it’s whatever is in my hand.”

Yours truly would give the strongest endorsement to the Colossal Reuben and its sauerkraut made from scratch.

Finally, as Merrill and Duncan like to say, “Dream Big, Live Colossal.”