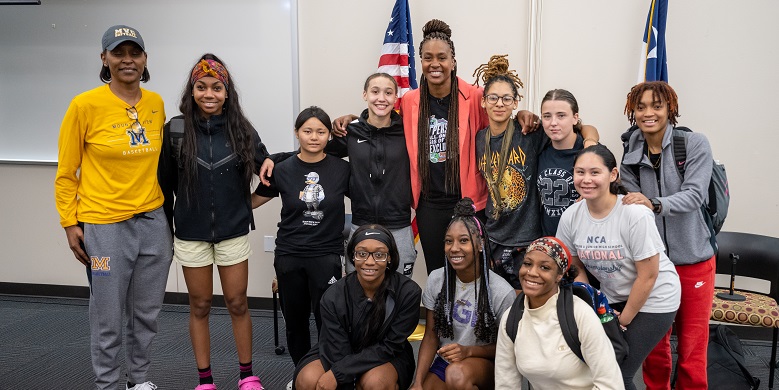 Published by Dallas College on September 7, 2022

That’s how student Kayla Sotelo felt after listening to Tamika Catchings share her story of becoming one of the best basketball players of this generation. Catchings proudly claimed she is a direct product of Title IX, the historic civil rights law passed in 1972 that barred sex discrimination in the nation’s schools.

Sotelo can relate to Catchings’ journey as she’s part of the next wave of women athletes in the college ranks.

“I take away that I’m capable of doing anything, even if I’m a woman,” said Sotelo, a midfielder on the Mountain View women’s soccer team.

“I feel inspired. Whatever she said about motivation and stuff like that, I feel like I could do the same things she’s doing right now.”

Catchings served as the keynote speaker as the college celebrated the 50th anniversary of Title IX Wednesday afternoon, Aug. 24, at the Mountain View Campus.

Catchings talked about facing adversity in her younger years with a hearing impairment and speech impediment. But she used that as motivation on the court, going on to win at every level.

She starred in high school at nearby Duncanville, being part of state championship teams in volleyball and basketball. Her winning ways continued in college at University of Tennessee, where she won the women’s basketball national championship in 1998. Catchings went on to win a WNBA championship with the Indiana Fever in 2012 and four Olympic gold medals with Team USA in 2004, 2008, 2012 and 2016.

All of that wouldn’t have been possible without Title IX, Catchings said. And she encouraged everyone in the room to do three things with Title IX in mind: embrace equality, embrace opportunities and embrace accountability.

Title IX was passed on June 23, 1972. Since that time, 3 million more high school girls and 200,000 more college women have opportunities to play sports each year.

There’s more work to do, of course, but progress is being made. And athletes such as Sotelo are more encouraged than ever, especially after listening to someone of Catchings’ stature.

“I’ve been capable of doing anything,” Sotelo said. “At this point, I feel I can go even further with it.”