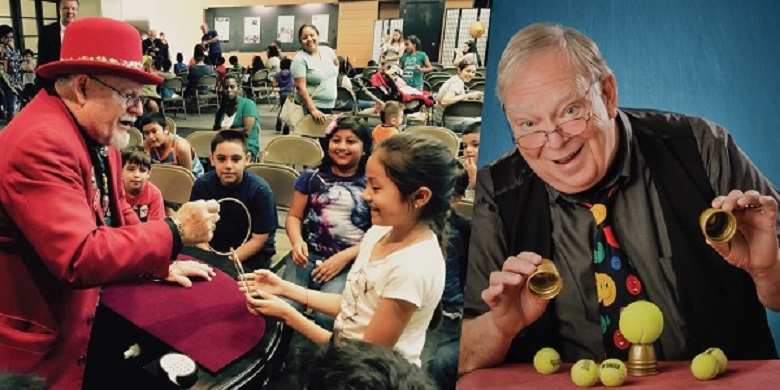 From Magic to Models — Outside Interests Abound at Dallas College

Longtime English professor Dr. Geoffrey Grimes has been infatuated with magic since childhood. The Houston native remembers watching Mark Wilson’s TV show “Time for Magic” in the mid-1950s with Wilson performing an illusion where his assistant (and wife) Nani Darnell somehow popped out of a dollhouse.

That planted a seed that developed into a lifelong passion for Grimes, who joined Dallas College in 1971. Grimes, 78, is still going strong both in teaching as well as bringing the beauty of magic to the Mountain View Campus. The community will be able to see it up close later this month at the MVC Family Magic Show set for July 26, 27 and 28 from 6-8:30 p.m. in Bldg. B, Room B149 at Mountain View. The show is free and open to the public. Attendees are encouraged to bring a canned food item to donate to the Mountain View Campus Food Pantry.

Grimes is just one of the many employees at Dallas College with an interesting hobby. With a workforce pushing 6,000 total employees, the school isn’t lacking for interesting folks. Hey, maybe there’s someone who is a World War II history buff. Or someone who bucks the notion that NASCAR has lost some of its steam over the years.

For Grimes, he’s still got plenty of tricks up his sleeve to entertain students, staff or even prospective basketball players on a recruiting visit. Grimes’ pockets are filled with potential props. Heck, you may catch him wearing a thumb tip. Or, if there’s a box of tissue paper nearby, he’s more than capable to wow as he’s mastered the disappearing tissue trick.

“We all need the experience of astonishment and wonder,” he said, “because it points to the great mystery that we’re all experiencing.”

Grimes specializes in parlor magic and spends his free time performing at local restaurants and parties. And, of course, the MVC Family Magic Show has become a summer staple.

“We’ve been doing it since 1999. The whole purpose is to give families in the community a reason to come to the campus,” Grimes said. “It’s a family event. I’ll have friends of mine from the magic community in Dallas-Fort Worth perform.”

Seeing magic take center stage for the local community never gets old for Grimes. The performing art has been around since Ancient Egypt and has enjoyed a resurgence in recent years. Magicians such as Shin Lim have gained popularity through televised talent shows such as NBC’s “America’s Got Talent.”

Just like Grimes was influenced by Wilson, the latest wave of magicians draw inspiration from household names like David Blaine and Criss Angel.

“Criss Angel and David Blaine have seeded the next generation of magic,” Grimes said. “It started with very impromptu street magic on the streets of New York, ‘Hey, come over here. Let me show you something.’ That made magic accessible. It became a YouTube phenomenon and gave kids permission to get into magic at a level they could afford. All they needed was a deck of cards. That created a whole generation of card flickers. Shin Lim is one of those kids.

“Magic used to be something more formal to now it’s more accessible. It’s really complemented the lifestyle of kids who want something quick and in the moment and then move on.”

The MVC Family Magic Show will provide a mix of the old-school and new-school ways of doing magic.

As stated, Dallas College has plenty of employees with interesting hobbies. Whether it’s Grimes and his love of magic or someone such as Konley Kelley, who jokingly describes himself as a “modeling nerd.”

Kelley, who is the project leader for business development at The Ascend Institute powered by Dallas College, has built a number of models over the years. As a fan of military history, most of his projects have centered on tanks, airplanes and ships.

Among his favorite builds include a 1/35-scale World War II diorama depicting the First Wave at Omaha Beach on D-Day. Kelley was able to use real sand from Omaha Beach that his wife Whitney collected on a trip.

Kelley has also built a 3D model of the TBF Avenger that former President George H.W. Bush flew in WWII, and a 12-foot display of the USS Hornet aircraft carrier that includes a zipline activity.

The WWII-era builds are special, Kelley said, because there is more character involved with those projects. For instance, planes from that era have more intricate nose art compared to today’s fighter jets.

“The older planes have their charm,” said Kelley, who joined Dallas College in May 1997 after a stint in Hollywood working in the entertainment industry.

“The affection toward the old planes is a different mindset. They have such style and nostalgia and character about them.”

Kelley doesn’t only scale model these aircrafts, either. As he put it, he’s gotten a 1/1-scale experience by being a member of the Commemorative Air Force. The CAF is an organization based in Dallas that travels across the country hosting airshows with historical aircrafts.

Kelley isn’t a pilot, but he’s been part of the crew when former military members have taken a ride on the historic planes.

“I had a World War II veteran sitting across from me on the B-29 one time,” Kelley said. “He had been a B-29 crew member. We were in California, flying along the coast, and I could’ve pointed out where Pepperdine was or Malibu or even Nicolas Cage’s house. But I looked at him and he had gone back in time 70 years. You could just tell in his eyes he was back with his crew, so I just let him have that moment. And that’s a pretty neat thing.

“It’s very special to them. They were in the prime of their youth fighting for their country. That’s why it’s known as The Greatest Generation.”