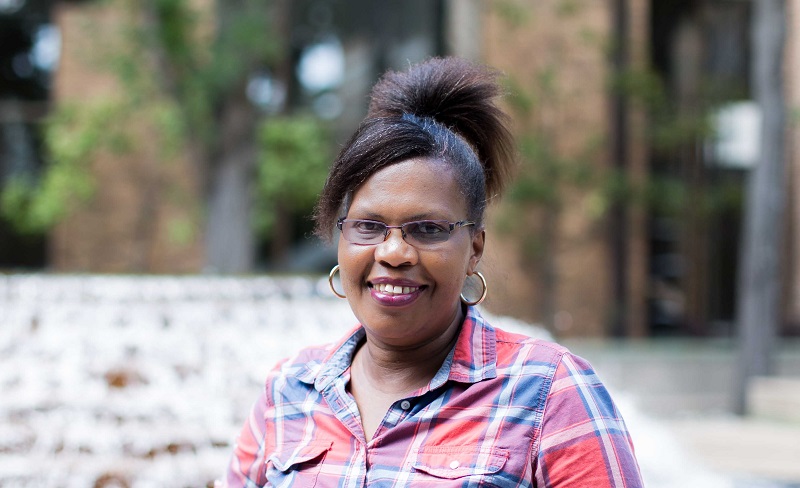 How did you come to Dallas College? What did your journey look like when you arrived?

My journey to Dallas College was interesting. I was enrolled at West Coast University, but one day I took an Uber and the Uber driver asked me why I was going to that university. He told me that Brookhaven Campus was about three miles from where he picked me up. He said he was a tutor at the campus and taught biology. He recommended that instead of me driving more than 20 miles to West Coast University, I should go to Brookhaven. When I went the following day to Brookhaven, the enrollment process was so easy. After two weeks, I had already taken my TSI and other things. And within the same month, I was officially a student. I’m happy that I’m here.

When are you graduating?

I’m hoping to graduate next year or the following year. I’m not giving up. I’m pursuing as much as I can no matter what.

I’d also like to say how much I appreciate Brookhaven. People ask me what’s so good about it, and I tell them it’s because I’ve received so much help from the college. My rent has been paid by the college because I haven’t been able to work since May. When I got in touch with one of the coordinators at the Brookhaven Campus, they were able to help me get three months of rent paid. When COVID-19 hit, I was also able to get a laptop and a hot spot so I was able to continue with my classes. I have also received food assistance. I really appreciate the support that the college has given me that has enabled me to get this far.

Where are you from? What is your story coming to the United States?

I was born and raised in a rural village in Kenya, Africa. Growing up, girls were not supposed to be educated.  A girl going to school was a waste of time. They are looked at like an asset. However, fortunately for me my dad was raised by a person who knew the importance of education, and my dad  wanted his own children to go to school.

It wasn’t an easy journey though. Being an African child, our parents didn’t have the resources to send us through school but my dad worked very hard. From the day I started school as a child, I was focused. When I was in the first grade, the teacher would place the exam on my desk, and I always wanted to have the best score. I always wanted to be at the top of the class. I worked very hard in school and when we did the national exam in our district, I ranked highest among the girls.

I received admission into the nursing program and at the same time was accepted to join the teaching profession at another college. However, when the admission letters were sent, my family was using our neighbor’s postal address. He was the only man in the village with a postal address and he would take his time to get the mail. By the time I received my admission letters, I missed out on the first intake of students for the nursing program.

I didn’t want to wait for the second intake of students, so I trained for two years and qualified as a teacher. For the next thirty years, I taught all ages from the first grade to high school.

Because of what I’ve seen when teaching and the things I’ve seen happen in Kenya, I decided to help girls. Back home, female children are used like pack animals because they’re the ones who are supposed to work on the farm, fetch water and cook. I tried to enlighten my girl students about their place in society. They need to be focused and to know where they are headed. I refused genital mutilation and tried to fight that practice by educating girls in school to say no when the time came. I would point them in the right direction to get help and to run away from child marriage.

Because of this, I was looked down upon in my community. I risked my life twice. I was almost killed. I came to America for asylum because I had to run away. Back home, when you report an incident, the authorities don’t do anything about it. There’s a lot of corruption. You can’t get any justice back home. That’s why I’m here, to help make our society a better place for girls.

Tell us about your journey now as a nursing student. How has your experience been and what do you hope to accomplish?

Once when I was younger, I became ill and my dad took me to the hospital. One of the nurses taking care of me was so caring. I told myself that when I grow up, I wanted to be like her and help people. So, I’ve always had a passion for nursing since my early days. I love seeing a person who has suffered transform into having a better life.

When I was a child, my mom would pack my lunch and all the children who did not have food on that day would share from my small lunch. I would never put a spoon in my mouth before the other children were fed. I shared everything that I had. Since I could only afford one eraser for school, I would bite mine into small pieces and share the bits with the other students so they had something to use in class. I’ve always cared for other people.

When I came to this country, I was hired as a caregiver. My first client was an elderly lady who needed a shower the first time I worked with her. She was a very fragile person who needed my attention. I was so scared, but I told myself I was going to do it. After I gave her a shower, I combed her hair and massaged her fingers. The family liked me so much that they told my company to not send anyone else but me.

So, that’s how it started. I found myself falling in love with what I was doing for the elderly. I had never been a caregiver before. I was just trying my best. Then, I realized I was changing lives and helping put a smile on someone’s face. You get joy and satisfaction when you help change a person’s life. I have worked in facilities and in different rehabs where clients tell me that I’ve made their day. Even if I wasn’t getting paid for my service, it gives me satisfaction like I’ve never felt before to see that I’m changing a life and giving someone a reason to face tomorrow.

I’m in the nursing program now because I want to serve senior citizens in a more advanced way. There are times now that I am restricted to providing only specific services that I can provide to a client. Instead of waiting for a nurse or another medical person to do it, I want to do it. I want to do everything possible to help my clients.

What is some advice you would give to another student or someone who is doubting themselves?

I’m a single mother of three children. I’m not in school because I have it all, it’s because I have determination. Your background doesn’t matter. Whether you are single or married, age is not a factor when it comes to reaching your goals. It’s just about believing in yourself. Set your goals and be focused. When I joined Brookhaven, I thought I was going to be in classes with people who could almost be my grandchildren. I was curious to see how students and even the professors would perceive me. But interestingly, no one was bothered by me. That’s why I’m able to say that Brookhaven is the place to be. We are our own enemies. People out there don’t care what you are or what you are doing. Just set your goals and chase after them.

In the next five or ten years, where do you see yourself? What do you want your legacy to be?

Back home, there are not only problems with young girls but also boys. Drug addiction is a large issue. At the time I left home, the number of boys dropping out of school was higher than girls. So, I want to continue my education by getting a master’s in psychology, so I can have the opportunity to meet with youth who are struggling.

After I finish the nursing program, I want to get my master’s. I have also empowered my children with education. My daughter has already graduated from college and she’s working as an accountant back home in Kenya. My oldest, a son, is working in business administration. And my youngest is working in electricity.

Interview and photographs by Jessica Estrada.