Home » Student Success Story » It’s Been a Summer for Stargazing 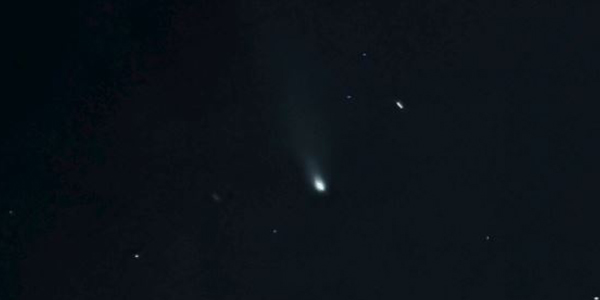 It’s Been a Summer for Stargazing

Published by Eddie Middlebrook on August 17, 2020

During long evenings stuck at home social distancing, you may want to consider turning off your screens to watch the show that’s just outside your window. This summer, amateur astronomers around the globe are making the most of quarantine. While the Comet NEOWISE fades into the cosmos, another celestial show is peaking: the Perseid meteor shower.

In July, starstruck student Allen Madathil took a break from studying to search for and photograph NEOWISE.

“I enjoy going out and looking up at the night sky. It feels like a form of meditation; just knowing how small my problems are in this universe brings comfort to me, somehow,” said Madathil, who took an online physics class through Mountain View this summer.

“It takes time and patience to find an object, especially if it changes position daily, like Comet NEOWISE,” he said. Madathil heard about the comet through social media, news articles and in his physics class. He waited until July 22, when the comet was to be at its peak, then sought out a dark and isolated location with little light pollution.

Even with a star map, it took him nearly 40 minutes to locate NEOWISE. “I used my camera to get a wide-angle shot and looked for it in the pictures. Then, I positioned my telescope and zoomed in my camera for a closer shot,” he said.

While Comet NEOWISE won’t be visible again for about 7,000 years, there is still plenty to see in our night skies. Now, in mid-August, is the optimum time to view the Perseid meteor shower.

As Madathil heads off to Sam Houston State University, where he’ll major in engineering design technology, he says he’ll keep his eyes to the sky at night. His sights are set on becoming an engineer or designer in the automotive industry, but he says he’ll continue to dabble in astronomy and looks forward to the annular solar eclipse in 2023 and total solar eclipse in 2024.