Home » Programs » What Can I Do With a Computer Aided Design & Drafting Degree? 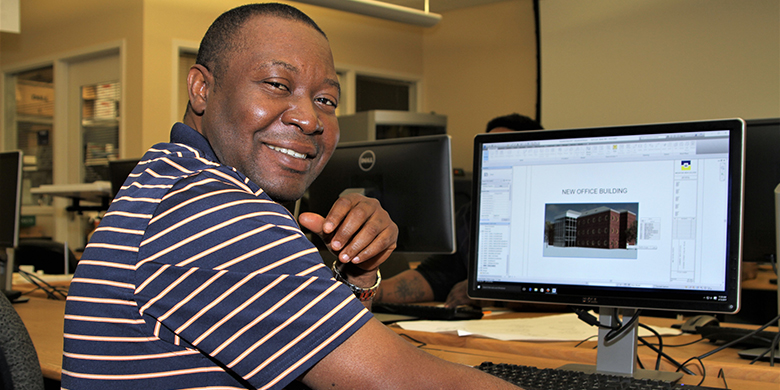 What Can I Do With a Computer Aided Design & Drafting Degree?

Computer aided design and drafting (often called CADD or CAD) aids in the creation, modification, analysis or optimization of a design — like a machine part, or the design of a building. Typically, CADD output is in the form of electronic files for print, machining or other manufacturing operations. Modern CAD software does much more than just drafting — it provides a wide range of computer-based tools that assist engineers, architects and other design professionals in their design activities. Sound like something you might be interested in?

When Did Computer Aided Drafting Start?

“Drafting has been around since the beginning of time,” said Steve Billingslea, CADD program coordinator at Mountain View. “Even cavemen used drafting by drawing in their caves. The industry evolved in the 1980s from board drafting — using sliding rulers, pencils and compasses — to computer software.”

Computer aided design was invented and used as early as the 1950s. The term “CAD” was coined by Douglas T. Ross, who worked with a team that realized an object, once drawn, could be reproduced at will. Since then, computer aided design and drafting has been used by engineers and designers in the creation of product, architectural, graphic and engineering design in a variety of industries — basically anything from machine parts to architectural designs and more.

How Computer Aided Design Is Used

CADD helps designers prepare drawings, specifications, parts lists and other elements using specialized computer programs. CAD software helps designers improve their productivity, as well as quality of design and communications through documentation. This electronic design automation helps extensively in the automotive, shipbuilding and aerospace industries, as well as in industrial and architectural design. Computer-aided drafting and design can even be used to assist with the production of special effects in movies, advertising and technical manuals.

Computer aided design and drafting is important because it can help lower product development costs and greatly shorten design cycles by saving designers time. Designers can lay out and develop their work on screen, print it out and save it for future editing.

At DCCCD, students use programs at like Revit for architectural plans for buildings — but even with the help of computers, they must be very meticulous in their work. “You need to be a perfectionist,” said Billingslea. “What can earn you a ‘B’ in school can get you fired in the work place. If you misplace a hole in the design of a part, that can cost a company thousands of dollars, so you have to be a stickler for detail.”

How Much Do Computer Aided Designers Make in North Texas?

With your associate degree, you can expect an average starting computer aided design salary in Dallas and North Texas of about $41,000 per year, making CADD a good career. When job hunting, you should also take into account the broad range of uses CADD skills can apply to — Mountain View student Janette Parachini, a part-time employee at American Airlines, plans to use the skills she develops in class to pursue her life-long dream of becoming an interior designer.

“I’m close to the end of my career at American Airlines, so interior design will be my second career,” said Parachini, who is 60 years old. “I always thought about being an interior designer, but you have to live life. I supported my family and had kids and grandchildren. Now that the kids are all grown up, I can pursue my dream.”

How (and Where) to Learn Computer Aided Design

You can develop CADD skills at one of three different DCCCD colleges: Eastfield, Mountain View or Richland. The CADD program at Eastfield and Mountain View includes:

The CADD program at Richland includes these specializations within the Engineering Technology program:

Jobs for people with CADD skills are plentiful in the Dallas area, said Marques Washington, CADD program coordinator at Eastfield. He added that he has a hard time keeping students in school to finish their degrees.

“The last two years have been really good with lots of companies looking for students,” said Washington. “We get referrals from former students who got jobs, and their companies call us when they need more workers.”

Washington said most students don’t know where they’re going to end up, so it’s important for them to have a good command of the basics.

“When students graduate from our school, we make sure they have a strong background in CADD so that they won’t need to ask questions about the software when they get to their jobs,” Washington said. “But we always prepare them to ‘learn to learn.’ That way, a student can take a concept and apply it to the next project.”

Not Sure About CADD? Design Your Career in Other Ways